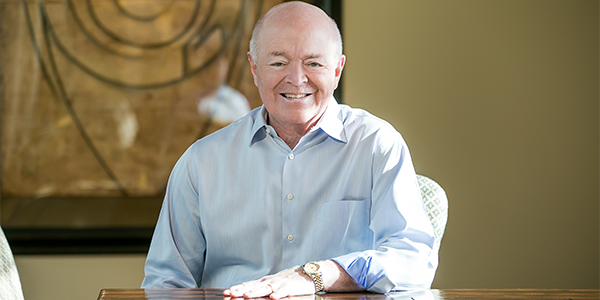 "Leaving my IRA to my children would mean more than half of it would vanish in taxes. Giving it to The Heritage Foundation through my estate is a very tax effective thing to do. To me, it's worth less than 50 cents on the dollar, but to Heritage, it's worth 100% and makes such a difference."

Given his MBA and life-long experience as the chief financial officer of several major public and private companies, it should come as no surprise to anyone that Heritage Legacy Society Member Norm Metcalfe takes issue with a Congress seemingly incapable of balancing a check book. It was this strong penchant toward fiscal conservatism that first led him to Heritage more than 20 years ago, but his appreciation and understanding for all the work Heritage does—and more recently, Heritage Action—has grown exponentially.

"It's frustrating to be one citizen out of 320 million," says Norm about his motivation for giving to Heritage. "Supporting Heritage is a chance to help in some small way to guide the policies of our country. From the work you do in Congress to getting the message out to the American public through channels like the Daily Signal, I appreciate the breadth of Heritage's impact. One person can't do very much, but Heritage has a big enough presence to make a significant difference for all of us."

Norm recently made an inspired decision to name both The Heritage Foundation and Heritage Action the ultimate beneficiaries of his IRA. "I've always intended to give some portion of my retirement account to charity, but I've been really fortunate and now realize I won't be dependent on it." says Norm. "Don't forget, I'm a finance guy. Leaving my IRA to my children would mean more than half of it would vanish in taxes. Giving it to The Heritage Foundation through my estate is a very tax effective thing to do. To me, it's worth less than 50 cents on the dollar, but to Heritage, it's worth 100% and makes such a difference."

Tax effectiveness notwithstanding, for Norm, the decision to make a significant legacy gift to Heritage had as much to do with Heritage's work today as it does the future of our work. "I worry about my children and what the country would have looked like for them if we had 8 years of Hillary Clinton." says Norm. "It's heartwarming to see President Trump has already adopted 64% of Heritage's Mandate for Leadership recommendations since taking office, even higher than Reagan's 49%. That's a real tangible for me to take away as a supporter. I know Heritage was instrumental in his transition, too, so for Heritage to strategically get in there early and help

steer this great ship in the right direction shows tremendous initiative. Not to mention, you've provided a benchmark on which future administrations will be measured."

"At the end of the day, I believe in free enterprise and limited government and getting the government the heck out of the way," says Norm. "There are a few things that the federal and state governments do well, but there are lot more things that the private sector does better. Who knows, maybe it's healthy for our country to have a liberal administration take us off course every now and then so we're reminded of what doesn't work. America's strength is as much based on economic might as it is military strength. If we're not strong economically, we can't be strongest country in the world. We don't have to be the world's policeman, but we can be a beacon for good. Heritage promotes the policies that actually make this possible."

"I view Heritage as true north for our country," says Norm. "Sometimes we get off track—these things tend to go in cycles—but when opportunity arises, Heritage is the north star America needs."