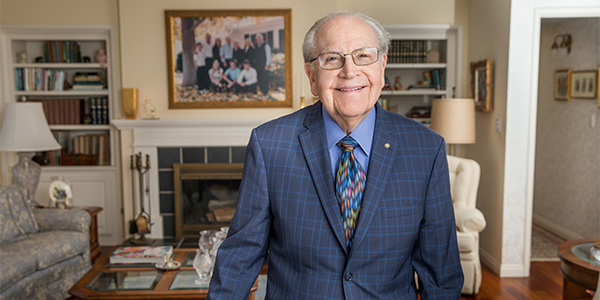 "If you're fortunate enough to have some savings, you know it's not doing much in the bank. The deduction and income payout I get from a gift annuity is fantastic, but as great as the payout rates are, my equivalent payout is much better than it looks on paper because of the tax-free income I receive from it."

It's 1938 in Grandfield, Oklahoma, a rural community still in the throes of the Great Depression. The local population is barely hanging on after two catastrophic waves of Dust Bowl devastation when it's hit by a third. The family living behind the town's gas station is barely making ends meet has no choice but to join the mass migration West in hopes of finding work.

For Heritage member Knox Williams, this isn't an excerpt from the pages of a Steinbeck novel. It was a very real and formative chapter in his young life. At age 10, Knox and his parents began a long journey from Oklahoma to California in an old, two-door Model A Ford. Knox recalls, "My father told us we were taking the 'scenic' route, which meant earning money wherever we could. At times that meant ranch work in Nebraska or picking peaches in Idaho. Everywhere in between, we'd sleep on blankets on the side of the road."

They eventually arrived in California where his family settled into the life of migrant farm workers. Knox remembers the going rate for 100 pounds of picked cotton was $3.00. Anyone who has ever held a cotton ball will have a healthy appreciation for what it would take to hit the hundred pound mark. It was hard work, but in his characteristically positive way Knox is quick to point out, "We were the lucky ones. The sheer number of migrants looking for work was overwhelming, and many thousands were turned away. We never took our good fortune for granted."

Knox remained in California and in time graduated from UCLA—the first in his family to graduate college. He had a knack for sales and worked his way up at a couple of local companies, which also allowed his wife June to pursue a college degree of her own. Still, his life's lessons fueled a desire to be in business for himself. He and June took a chance on a water conditioning franchise and worked nonstop to get it off the ground. Knox's sales experience would come in handy because as he says, "In our line of business, that's a lot of door knocking unless your name happens to be Culligan."

Knox and June successfully grew their Rayne Water franchise for the next 34 years before retiring, and now his son-in-law and daughter are carrying on the family business.

It's no surprise someone who experienced the full scope of the Great Depression is deeply concerned by the corrosive effect of entitlements on American society. He looks to Heritage to promote commonsense reform in this area. "At the time, we assumed the New Deal's emergency measures would be temporary, and even FDR's federal work programs required some shared responsibility. It's alarming to see how far we've strayed from these basic expectations."

When it comes to personal responsibility and good citizenship, Knox embodies the best of both. His strong faith, positive energy, and sense of humor is infectious. He's devoted his time and resources throughout his community as well as the country at large thanks to his longtime support of Heritage. Several years ago his good friend, a CPA, turned him onto the tax benefits of Charitable Gift Annuities. He immediately decided to establish one with Heritage. "If you're fortunate enough to have some savings, you know it's not doing much in the bank," says Knox. "The deduction and income payout I get from a gift annuity is fantastic, but as great as the payout rates are, my equivalent payout is much better than it looks on paper because of the tax-free income I receive from it."

"Charitable gift annuities are a wonderful way to increase your income, but the advantage of a charitable gift annuity over a commercial investment is how it can help a cause like Heritage's," Knox goes on to say. "By establishing this gift annuity, I'm allowing Heritage to continue its good work. As far as I'm concerned, the real gift is in the giving."