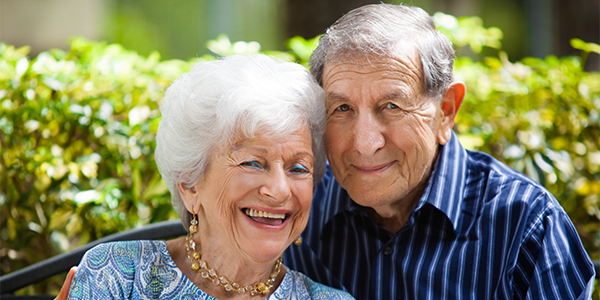 "If they destroy this country, where will we go? The moon? America is our last hope. If I don't stand up for freedom, I won't have fulfilled my mission in life. Remembering Heritage in our living trust is one of the ways I can make this happen."

In talking to Heritage Legacy Society member Karla Goldstein, there is one word that sums up her life's theme: Gratitude. In particular, gratitude for the blessings that go hand-in-hand with the privilege of being an American. For someone like Karla—who has lived under the oppression of Communism and endured the horrors of a Nazi regime—freedom is more than just a word.

Karla was born in Czernowitz, a city whose governing authority has changed hands many times, from Austria to its present day incarnation as part of the Ukraine. Until the age of ten, Karla knew it as a peaceful Romanian city renowned for its beauty and culture. All of that would soon change. In 1940, Hitler made a pact with Stalin and gave the territory to the Soviet Union, changing the city's fate—and Karla's with it—forever. Under Soviet occupation, the so-called "wealthy" were in danger of being deported, their fate unknown. As Karla recalls, "People would literally disappear in the night. Our family had to go into hiding."

It wasn't long before Germany decided to attack the Soviet Union and reclaim their territory. Under Nazi rule, Karla's Jewish family was subject to horrific anti-Semitism. Her father, who co-owned one of Romania's only factories with a gentile business partner, managed to keep his immediate family alive by riding the Nazis' wave of forced bribery. Even so, Karla and her parents were at times forced into hiding and were in constant danger of being deported to a ghetto, which was an almost assured path to the concentration camps. It was a terrible fate that claimed the lives of family members who once lived under her own roof, such as the beloved aunt who was a second mother to her.

After the war, Karla's life followed an almost impossibly circuitous route that included decades of Communist rule, an escape aided by falsified documents, separation from family, and the difficulty of coping with a lost childhood. Through it all, she never lost her faith or the profound sense of gratitude for her survival. When she finally came to the United States, it was at the height of the Vietnam War. "Seeing young people stepping on and burning the American flag shook me terribly," says Karla.

Her rejection of their anti-American mindset instilled a patriotic fervor that set her on the path to discovering conservatism. In Ronald Reagan, she finally found her hero."I was inspired to write a letter to President Reagan and let him know that it was because of him that I left the Democratic Party," says Karla. "He wrote back to me and said, 'You didn't leave the party. The party left you.' That's when my love affair with Reagan really began."

It was Reagan who led Karla and her husband Stan to The Heritage Foundation in 1982. "I was aware that Reagan looked to Heritage for leadership on key policy issues" says Karla. "I knew his administration adopted the recommendations put forth in Heritage's Mandate for Leadership, and that's all I needed to hear. Heritage was an organization we needed to support."

America's founding principles are under constant assault by liberal progressives who would be happy to see this country fall in line with the rest of Europe. As far as Karla is concerned, this is not an option. "If they destroy this country, where will we go? The moon? America is our last hope," says Karla. "If I don't stand up for freedom, I won't have fulfilled my mission in life. Remembering Heritage in our living trust is one of the ways I can make this happen. Socialism robs people of their potential and dooms them to a life of misery. I'll continue to do everything I can to save future generations from that horrible fate."

Will you consider joining Karla and more than 2,000 Heritage Members like her in leaving a legacy that says "No!" to the liberal ideologies threatening America's future? Please call our Heritage Legacy Society office at (800) 409-2003 or email us at legacy@heritage.org.