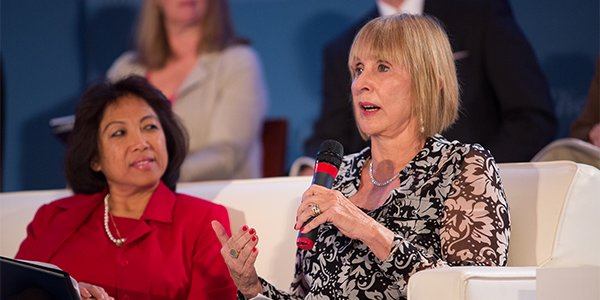 "I can't even begin to express what a relief it is to know that my charitable trust is now one hundred percent in keeping with my conservative values. It's a great feeling knowing that I'm doing something good for America rather than potentially contributing to the problem."
Like many Heritage members, Carol Manning feels a deep sense of gratitude for what she has achieved in life, and it's this feeling that inspires people to give something back to the institutions that may have played an important part in their early formation. For Carol, as well as many other Americans, this often takes the form of a planned gift to their beloved Alma Mater. It's a gift that is not only motivated by gratitude but can also be born out of a deep sense of nostalgia. One of the most common types of life income paying gifts promoted by college and university planned giving departments is the charitable remainder trust, which is precisely the vehicle Carol chose to make her legacy gift.

Aside from the many wonderful income and tax benefits that charitable trusts offer, the main purpose of a charitable trust is to convey a significant "remainder" after a donor's passing. With this in mind, many thoughtful conservatives have begun to second guess their decision to support an Alma Mater that does little in support of their conservative values-or worse-is directly involved in advancing liberal agendas. As in many other areas of American life, college campuses are increasingly subject to liberal sentiments and policies that threaten our founding principles, and conservatives can no longer in good conscience financially support these efforts. This is the dilemma Carol found herself facing as she considered the charitable trust she'd established for her university many years ago.

Carol, who was moved to action by her disillusionment over the direction our country has taken in recent years, took a very important step in calling the Heritage's Legacy Society office to explore her options. "For some time, I'd been having deep misgivings about the trust I established for my Alma Mater," says Carol. "It was troubling my conscience, but I wasn't sure what, if anything, could be done about it."

Heritage worked with Carol in reviewing her trust instrument and discussing her options, which, quite typically, allowed her full discretion in changing her charitable beneficiary. "Heritage helped me with everything I needed in order to make the necessary changes." says Carol. "I can't even begin to express what a relief it is to know that my charitable trust is now one hundred percent in keeping with my conservative values. It's a great feeling knowing that I'm doing something good for America rather than potentially contributing to the problem."

Whether you're considering establishing a charitable trust for the first time or are reviewing an existing trust that may no longer be in keeping with your original intent, Heritage is available to discuss all of your options.