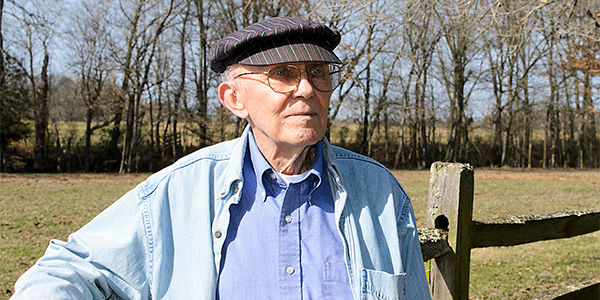 "It turns out you can save quite a lot over a lifetime, and suddenly I find myself in a position to make an estate gift that will help preserve our founders' vision for America. This is the core of Heritage's mission, and there's a lot of satisfaction in making a gift that will make such a big difference in our country's future."
Heritage Legacy Society member and native Tennessean G. L. Carter's first brush with the intrusive nature of government came at the tender age of 12 when his family's farm was confiscated by the Tennessee Valley Authority-one of the most controversial agencies created under Roosevelt's New deal. As difficult as it was for his family to be separated from relatives and neighbors, they managed to expand their farming operation after relocating to neighboring Hamblen County, Tennessee.

Although he may not have appreciated certain hard-learned lessons as a child, the experience of growing up on a farm during the depression era left an indelible mark on G. L.'s philosophy and work ethic. His laundry was done by hand on a washboard by his mother, and as a youngster he was responsible for carrying the wash water to the house from a nearby creek. "And it was all uphill, too!" laughs G. L. "Lessons in responsibility came early for me. By the time I was 15, I was responsible for the operation of our 160 acre crop and livestock farming enterprise."

Those early lessons were integral to G. L.'s long and distinguished career as an educator. He was enrolled in the Agriculture and ROTC programs at the University of Tennessee when Pearl Harbor was bombed. His education was delayed while he served 3 ½ years in the Army Infantry, eventually ending up in Europe in Patton's Third Army. He was able to finish his undergraduate degree after the war under the GI bill. A back injury incurred during the war prevented him from fulfilling his ambition of being a farmer, so in 1949 he accepted full-time employment as an assistant county agent for University of Tennessee's Agricultural extension Services. At age 39, he received a doctorate in cooperative extension Administration from the University of Wisconsin. He spent the next 31 years as an educator in graduate programs in adult continuing education at the University of Wisconsin and North Carolina State University. He also did extensive consulting work throughout western Europe, Southeast Asia, Africa, and Latin America. "Let's put it this way," says G. L., "I've seen enough of other countries to know that I'd never want to be subject to their government or health care!"

It should be no surprise that a lifelong educator like G. L. recognizes the critical importance of ensuring that future generations understand our nation's history, and it was a passion for our founding principles that drew him to Heritage. "Our Founders had a clear vision for a government which could ensure liberty and justice for all, but it can only be preserved as long as younger generations understand our history and the importance of the constitution." says G. L. "This is directly in line with everything Heritage is doing to educate congress, the American people, and our next generation of leaders."

G. L. is so passionate about educating future generations that he's arranged for a seminar series in founding principles for Middle and High School history and social studies teachers serving the Appalachian region. These are conducted at Lincoln Memorial University, which prides itself in having been created at President's Lincoln's request and which also graduates the second highest number of teachers serving the Appalachian region. In 2011, Heritage was honored to participate in one of these lectures.

"I'll never forget the advice my agricultural economics professor gave me as a sophomore at the University of Tennessee. He said, 'for every dollar you make, spend no more than 90 cents.' I don't know why this simple piece of advice made such an impact, but it really stuck with me," says G. L. "It turns out you can save quite a lot over a lifetime, and suddenly I find myself in a position to make an estate gift that will help preserve our founders' vision for America. This is the core of Heritage's mission, and there's a lot of satisfaction in making a gift that will make such a big difference in our country's future."

For more information about making Heritage a beneficiary of your IRA or other qualified retirement account, please email legacy@heritage.org or call our Heritage Legacy Society office toll-free at (800) 409-2003.