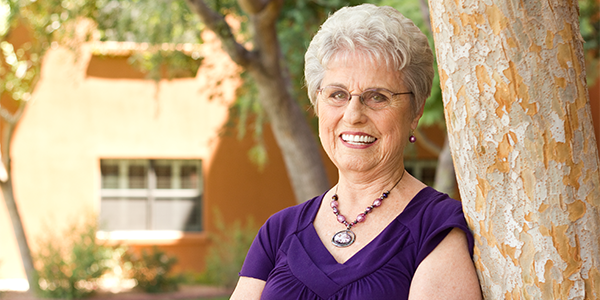 "I'd always had it in mind that I wanted to do something special for Heritage, and the fact that I could establish a gift that would actually supplement my income made this the perfect gift at exactly the right time."
As a pastor's daughter, Jean Bock gives all credit for her conservative beliefs to her Christian upbringing, which she believes runs parallel to many of the core values that have been cherished since our nation's founding. "It's difficult for me to separate what makes me a conservative from the values instilled in me by my parents," says Jean. "One shapes the other, and it's more a way of life for me rather than a conscious political choice." It was these conservative values that eventually led Jean to The Heritage Foundation's door, and eventually, to create a far-reaching legacy for America by establishing a charitable gift annuity that perfectly met her needs.

Jean was born in Buffalo, New York and was seven when her father accepted a pastoral assignment in Baltimore, Maryland. As fate would have it, Buffalo would play a role in her life again when she married a hometown boy-the son of a couple who once went on a double date with her own parents. Jean laughs, "It's funny how things work out sometimes!" After they were married, Jean and her husband Harold, or "Hal" as he was known by friends and family, continued to live in Buffalo for a short time until Hal's career at General Mills required the family to move to Minneapolis, Minnesota. There, they raised their two daughters and were very active in their church community before eventually retiring to Peoria, Arizona.

"It was around this time that we became familiar with Heritage's work," says Jean. "We were already very concerned about the way America seemed to be changing, and Heritage was there on the frontlines, fighting for everything we believed in. In Heritage, we saw an institution guided entirely on our founding principles. I especially liked that Heritage was not a political organization and wasn't aligned with a particular political party. It's important to me that everything Heritage does is based on principle, which means Heritage is always in a position to hold both parties accountable."

After Hal's passing four years ago, Jean decided it was time to consolidate a lot of things in her life, from living arrangements down to her charitable giving. In her words, it was time to "focus on the important things."

"I was in the process of moving into an independent senior living community when I received some information from Heritage about gift annuities. I'd already received similar information from my retirement community, but there was no question that Heritage was where my heart was. I'd always had it in mind that I wanted to do something special for Heritage, and the fact that I could establish a gift that would actually supplement my income made this the perfect gift at exactly the right time."

"My hope for future generations is that they will appreciate America's uniqueness, and that means having an understanding of our founding principles. There's only so much I can do as an individual, which is why an organization like Heritage is so important. Establishing this gift with Heritage was my way of ensuring these principles will endure beyond my lifetime."

For more information about establishing a charitable gift annuity with Heritage, please email legacy@heritage.org or call our Heritage Legacy Society office toll-free at (800) 409-2003. We thank you for your generous consideration.