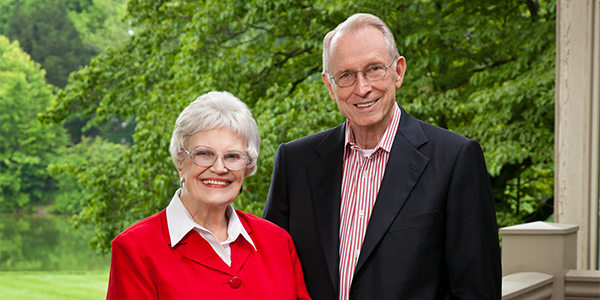 "Ronald Reagan once said 'If not us, who? If not now, when?' This sums up our feelings perfectly, and the 'who' in this equation is not just us, but hopefully thousands of other Heritage members who love America as much as we do."
When asked how they first came to learn of Heritage, most members reply they were introduced by a friend, received a special mailing, or saw one of our policy experts in the media. Ask David Coffey of Lenoir City, however, and he'll answer that he relied first-hand on Heritage research to help advance conservative public policy in his great state of Tennessee.

For ten years, David served in Tennessee's House of Representatives, and during that time, came to admire Heritage's work and looked to our research to help provide solutions to the policy conundrums he faced. "I know I'm not the only lawmaker who's ever been touched by Heritage's influence," says David. "I personally know at least one U.S. Senator who came around on a key issue when confronted with Heritage's research. That's the kind of impact Heritage has on policy debates."

Today, David continues to be extremely active in the public policy arena and has devoted his private life to education reform. Therefore, it comes as no surprise that someone who has spent the majority of his life carefully examining issues from all sides would take a similar approach to his charitable giving. "When I stopped to think about everything I believed in and how best to carry those ideals forward, including Heritage in my estate plans was the clear answer," says David. "But I also wanted to give in a way that made the most financial sense for me."

"Anyone who is my age ought to be thinking about fixed income investments, especially in today's market," says David. "Like a lot of people, I started to pay attention to the concept of annuities as I approached retirement age. That's why the idea of a charitable gift annuity that pays fixed income for life appealed to me."

"As much as I liked the idea, however, I have to be honest that I had concerns about how secure an investment a charitable gift annuity would be. I asked some hard questions of Heritage, and I liked what I heard about their history with annuities, the permanent segregation of annuity funds, and the various layers of reserves that back up each and every gift. Not all charitable gift annuities are created equally, and I think these are questions everyone should be asking of their charity."

"Anyone with a pulse has to be concerned about where our financial market is headed," says David. "Regardless of which party is in power, some very important decisions affecting our economy will be made in the coming year. Whether it's increased dividend taxes, increased estate tax rates and lower exemptions, or the Federal debt ceiling-we're in for a lot of changes, and so far, things are not looking very positive. I ultimately decided I felt better putting my trust in Heritage rather than the market, and the fact that there were so many charitable tax benefits resulting from our gift-like the income tax deduction and reduction in estate taxes-made the decision that much easier."

"Of course, tax benefits aside, our main reason for making our gift is our love of country and the founding principles that make it great," says David. "Ronald Reagan once said 'If not us, who? If not now, when?' This sums up our feelings perfectly, and the 'who' in this equation is not just us, but hopefully thousands of other Heritage members who love America as much as we do."

For more information about establishing a charitable gift annuity with The Heritage Foundation, please email legacy@heritage.org or call our Gift Planning Office at (800) 409-2003.